Emotional Innercise: My pet, my friend, my familiar, Part 2 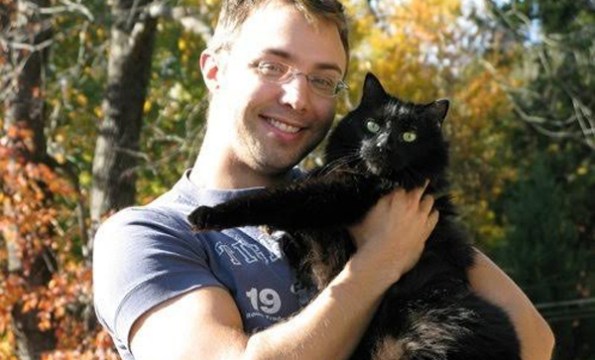 Nearly 10 years ago I wrote a qnotes Lifestyle article about my pet cat Sméagol concerning the deep connection between us as pet parent and fur baby. When I wrote it, he was in his prime as I was recovering from a disastrous relationship that ended in a fraud debt of $100,000. Intense times. But here we are a decade later, and it’s time to revisit and close this unintended two-part entry.

I will never have kids. I like other people’s well-behaved children, but I don’t want my own. I don’t want to ever be the reason someone grows up and needs therapy. Sméagol and Ophelia aren’t my pets, they’re my children.

Although I don’t need or want to procreate or adopt, I do still feel an insatiable need to love, nurture and shape. And to be completely honest, my cats are a carbon copy of various parts of my personality, eccentricities and habits (while also remaining uniquely interesting people unto themselves). I’ve formed them, but they’ve definitely influenced me, too. Does that sound like a mere pet?

The caregiver in me is the font of very generous and fiery (and probably codependent) love. I want to pour this liquid gold into a receptacle, but people tend to have cracked or broken hearts, so my devotion tends to splatter all over the floor. Pets don’t have those cracks. They receive all the love we’re willing to give, and yet still they need more to fill them. It couldn’t be more perfect.

But the price of great love is eventually paid for with great loss. Whether it be with people or pets, we go into these relationships knowing they’ll eventually end one way or another. And yet we still want these bonds. We seek them out, because bonds bind. They tie us to life. Love is our anchor. We send love out, and we take it back in like a constant breath of interconnectivity. I’m convinced it’s the reason we’re here.

Yesterday I had to give Sméagol over to peace. He suddenly developed kidney failure brought on by aggressive pancreatic cancer. I came home in the afternoon, took him to the hospital that evening, and the next day at noon I wrapped him in my arms as he wandered off into eternity. That was rather poetic, but it doesn’t make up for the fact that this sucks so hard that I feel like I’ve been turned inside out.

My bond with KITTEH

For many years Sméagol was the only person I’d see for days on end as I recovered from travel or hid away in my times of deep depression and self-inflicted hermitage. Ophelia joined us in 2013. I adore her, but Sméagol has been my boy since 2002. Our history goes back much further. The Kitty Consortium took care of me by needing me to feed and water them. They needed me to clean their messes, and they needed me to touch, play and exercise. I don’t want to think too much about what might’ve happened if they hadn’t been there needing me.

They’re an obligation I can’t ignore. They’re affectionate and funny. They want me to be happy. They know when I’m not. Sméagol in particular devoted himself to keeping me okay. God, I love that cat!

My grief has been terrible. If you read this and don’t understand why, I pity you. Everyone deserves to know the unconditional love of a pet. But until you have experienced this, try to reserve judgement when people you know are in my situation. Avoid statements like, “Life goes on,” “You’ll be fine,” “It’s for the best,” and “It’s just an animal.” These statements reveal that you’re an asshole. Also, “When will you replace your pet?” Yeah, you can go to hell.

Some of the ways grief keeps punching me in the gut include:

Another reason this sudden death is shocking is because I have to examine my own mortality again. I’m looking at all the subtle ways time has eroded (burnished?) my body, heart and mind. There’s also a reversal: Ten years ago he was in his prime, and I was in deep pain. Here we are, and although I’m a little more worn (seasoned?), I’m in the best shape of my life, and his pain has ended.

I’ll pick up his engraved urn in a few hours. Sméagol’s ashes will be on my altar, because he’s still my spirit animal and collaborator in Magick. One day I may even use some of his dust to create a diamond. There are companies that do that. Good journey, Hubba Bubba. Sméagoldy-Deeggledy-Dee. Big Poppa. My Monster. Mister Mush. Mushous à la Squishous. Friend.

I’m a Crazy Cat Lady? I’m passionate about my family (human, feline or otherwise). I prefer that to being “dignified” in the face of loss.